My Review of Disney’s Descendants 3!! 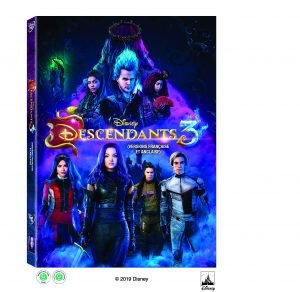 I recently had the pleasure of watching Disney’s Descendants 3 on DVD and wanted to share my review:

Descendants 3 is the third and final installment of the incredibly popular, Disney’s Descendants trilogy. It features the offspring of some of the most famous Disney characters of all time.

Descendants 3 continues the story where the other two left off…

Everyone knows the story of Beauty and the Beast: they married and the Beast united all the kingdoms in the land. He then elected himself as King of the United States of Auradon (Descendants). Once elected as King, the Beast, ironically, boots all the witches, psychics and monsters, on to the Isle of the Lost. A place where magic and WIFI are expressly forbidden, and then surrounds the entire island with a magical barrier force field, with no way out…until Ben (played by Mitchell Hope) the Beast’s son, invites four teens from the Isle of the Lost, to come to his preppy school on Auradon (the first Descendents movie). Ben believes the VK’s (Villain Kids) to be innocent from the sins of their parents and offers them their freedom, ultimately proving his point that they’re good and decent kids, while winning the heart of Mal (Maleficent’s daughter) in the process. And the story continues (with Descendants 2) where Uma, a VK on the Isle, spurned by not being invited over to Auradon, is ultimately enlisted by Ben, the new King, to bridge the gap with Isle, so that more VK’s can be invited over to Auradon.

This is where Descendants 3 continues the trilogy: the four primary characters, Mal (Dove Cameron), Evie ( Sofia Carlson), Carlos (played by Cameron Boyce) and Jay (Booboo Stewart) announce in the Isle daily newspaper: the Crumbled Times, “VK Day! The next four VK’s to go ashore!”. Then simultaneously all the kids on the Isle break into a musical dance number, lead by Mal and her crew as everyone is so excited to potentially be picked as one of the four new recruits to go to Auradon.

The love story between Mal and Ben continues in this final chapter, where Ben professes his love for Mal as he breaks into song in front of the entire kingdom and then aptly proposes. But the real excitement starts when Hades (played by Cheyenne Jackson) appears and tries to break through the barrier just as the main characters attempt to leave in their limo with their four new recruits to Auradon. Mal turns into a dragon and pushes Hades back behind the barrier and saves her friends for the timebeing. However, back in Auradon, the Beast wants to make the magical barrier permanent from the likes of Malicafent, Uma and Hades, to protect his family and the citizens of Auradon.

Turns out there’s a bit of a twist to the story, when Mal reveals something significant about her relationship with Hades. The truth comes out when Mal seeks Hades ember magic stone to combat Princess Audry (daughter of Aurora and Prince Philip played by Sarah Jeffrey), as Audry has become unhinged being jilted by Ben and falling for Mal. Audry embraces the dark side of evil and acquires a green ember magic stone and puts a sleeping spell on Auradon, go figure.

No telling who is good or evil in this movie, but the message is clear: you can choose to be good or evil, no matter your past. Musical numbers are common in the movie, more than the two prior movies combined. I found it definitely entertaining!

Long story short: Audry’s evil use of the magic green stone eventually backfires and sends her into a deep sleep to which Hades is then called upon to heal her, in an ironic, twisted game of fate. Good can become evil and evil can become good. Ultimately, all the inhabitants of the Isle of the Lost are invited to Auradon in the end. Will Ben and Mal get married? You’ll have to watch the movie on DCOM to find out. All in all, an extremely entertaining film, which brings the Descendant trilogy to a fitting close.

The DVD is awesome with all its extra content, including bloopers and deleted scenes. You can see how much fun everyone had in creating it. The Descendants Short Story was also a nice add-on, sort of like a bonus music video. Plus the sneak peak of the sequel of Maleficent, Mistress of Evil looks amazing! I can’t wait to take the whole family to the theatre when it comes out later this year!!

Disclaimer: Disney’s Descendants 3, DVD was provided for this review. All comments, opinions and photos are strictly mine.

Please add widgets to your sidebar in Appearance / Widgets menu.